Clothesline Math has been a growing trend in mathematics education.  I saw Andrew Stadel give a talk on it (back in 2015), however it was geared toward middle school and high school math.  My mind, never shutting off, was pondering how to make it fit for my elementary teachers.    And in my research, there aren’t many elementary clothesline cards out there.

***Did you know that the number line is mentioned in the Common Core Standards 26 times from 2nd grade through 8th grade?*****

Each set of cards has been designed to have equal cards as well as multiple representations. They are all PDF files.

Blog posts on the Clotheslines 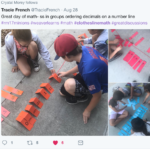 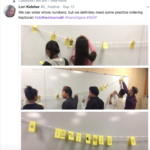