Recently, I was invited into a 2nd grade classroom to work on money (2.MD.8 Solve word problems involving dollar bills, quarters, dimes, nickels, and pennies, using $ and ¢ symbols appropriately).   The teacher wanted to try out something new to go along with this standard.  My suggestion was to try out the clothesline.  Let’s see if students could put different variations of coins from least to greatest.  It totally make cents (1st bad money pun)

And it went splendidly.

Each student was given a card to work on.  They calculated the total amount and put their answers on a post it note.  When they were ready, the hung their cards on the clothesline. 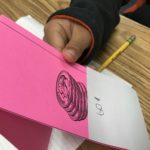 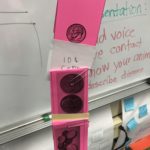 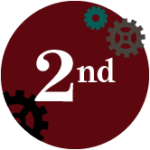 When they were finished, we went over each card and made sure that we added each coin correctly.

At the end of the session, they students asked why they were doing the activity now (they were well passed their money unit).  I answered by telling them how many skills were involved with this activity.

After my answers, I realized how much “bang we got with our buck.” (2nd bad money pun).  This activity had a lot going on it.  And all we did was put up a string and gave them cards.   But the thinking that went on was nothing less than incredible.