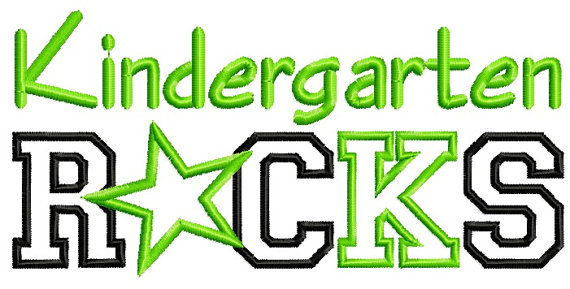 Today I spent some time in a kindergarten classroom.  Those tiny humans are inquisitive, direct, and full of spunk.  What I love about them is that there’s a whole world of wonder waiting for them and they’re ready to soak it in.

And let me tell you something about the kindergarten teachers.  They are ROCK STARS!  Especially the one I worked with today, Mrs. Z.  We spent sometime last week planning for a lesson.  She had given me a list of topics they were covering and she wanted my help to plan something.  During our planning time, I introduced her to Graham Fletcher’s 3 Act Lesson and Which One Doesn’t Belong.  We also read Joe Schwartz’s blog on the same 3 Act lesson pertaining to Shark Bait.  She was totally thrilled, but wanted to  plan her own 3 Act lesson.  Now it was my turn to be totally thrilled!

Here’s how the lesson went.

As a warm up,  Mrs. Z started the class with Which One Doesn’t Belong….except she did it Kinder Style!  What’s Kinder Style?  Kinders work on sorting by attributes.  So she posed the question “how would you sort these?” 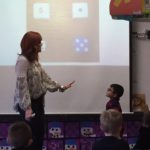 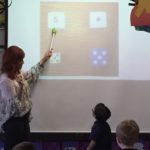 These smart little people came up with 5 different ways to sort these dice.  There categories would be color, size, shapes (Numbers versus dots or circles), corners (big and small), and the number 5.  They were absolutely engrossed.

Next she started the 3 Act lesson that we designed.  Act 1 – She introduced Alex the Alligator (alligator – K). We needed to find out how long Alex was.   She took some guesses (which varied from 8 cubes to a million!) And then the students got to work.

Act 2 – We handed out the clues.  We made sure to keep grouping the colored cubes in 5’s so that they could practice their counting and cardinality. 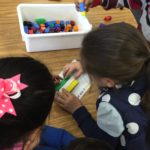 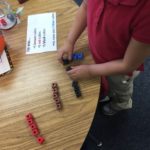 The students vigorously got to work.  The hunt was on to find the correct number of cubes and the correct color.  As Joe Schwartz noted, it was important to print out colored context clues for those students who couldn’t read yet.

Once the students were finished, we compared cubes on the carpet.  Mrs. Z reviewed their estimations and revealed the answer on the Powerpoint.  She also went over which estimations were the smallest and the largest.

Act  3 Once the estimations were finished, she asked the students to draw their own Alex the Alligator and show how the alligator was 18 cubes long.

Nathan drew blocks around the number 18.

William drew 18 blocks on the bottom.

Those are some ferocious teeth.  18 dots represent the cubes.

Mrs. Z and I did debrief (my favorite part) at the end of the day.  We both agreed that kinders need a story to go with the 3 act lesson.  They need context to wrap their heads around why they are finding the length, height, etc.    She also wants to create 3 act lessons that have 10 solid colored cubes plus a few more so that she could start addition problems with the kinder.

My favorite part of our debrief (and I’m paraphrasing)–

Well put, Mrs. Z.  I couldn’t have said it better myself.