The first week of school lesson plans usually consist of getting-to-know-you type activities.  In planning, I figured it would be a great time for exploring in math.  I hemmed and hawed about it.  At first I thought I’d do a 3 act lesson.  They are always exciting and engaging, but I couldn’t think or find one that these kids hadn’t seen in 5th grade.

But then I found this…… 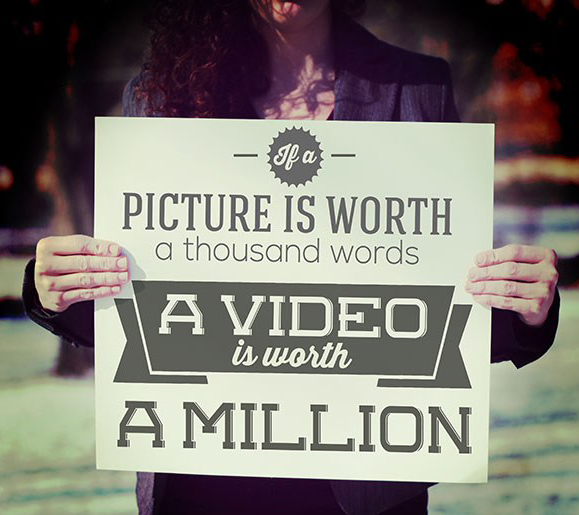 This was a picture I found a long while ago and kept it in my files, never knowing what to do with it.  I saw the math in it, but didn’t have a solid idea.  However, over the summer, inspiration struck and I got to work.

Have you ever asked your students about millions, billions, or trillions?  Do they truly understand the magnitude of these ginormous numbers?  It was worth a conversations.

Part one of our investigation was showing the above picture and simply asking “what do you notice and what you wonder?” 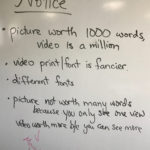 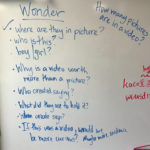 My students recognized notice/wonder which thrilled me.  Some perked right up when they saw those questions (which made me smile).  I noticed that my students focussed on the picture itself.  Some of my higher thinkers started pondering the saying.  Finally, we got to the question I was looking for….which was how many pictures are in a video.

Here’s the information we were looking for…

We decided we needed to figure out how many pictures were in a second, then a minute, and so on.  They determined that one second of video would be worth 2400 words.  And the video would have to be less than 1 minute.  One minute of video would be 1,440,000 words.   Not bad for my 6th graders.  They were getting the hang out this.

Then I asked them how long it would take them to draw a billion circles.  Saw this at a workshop given by Graham Fletcher back in January and I finally found a use for it. The students were thrilled to investigate this for sure. 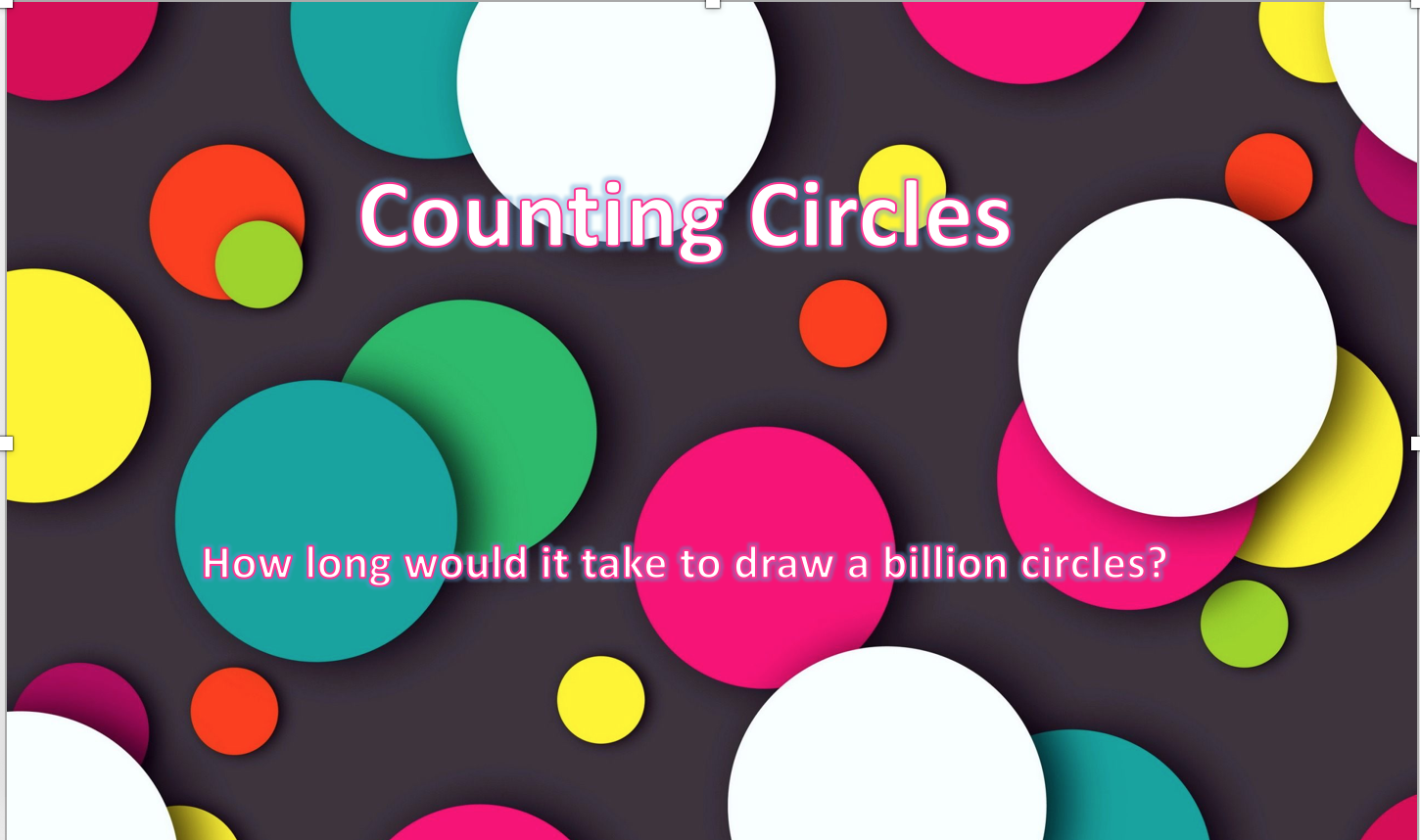 With much enthusiasm, the students were jumping with energy on this one.   One girl raised her hand and asked, “are were really doing a billion?”  I looked at the clock and responded, “we got a few hours left so I don’t see why not.”  Their eyes got bigger.

First we took guesses.  I felt like I was on the Price is Right.  “I’ll say 7 hours…I’ll say 7 hours and 15 minutes.”  One group kept whispering about the question and concluded that it should take about 1 second per circle.  I loved this observation because I could tell they were not only thinking, but trying to make sense of the problem.   The class concluded that we should just try it for a minute.    Before we got started though, there was more discussion on how big of a circle they should draw.  Wouldn’t that be a factor in how many they could draw in a minute?

I started the timer and the students worked vigorously on their circles.  The looks on their faces was priceless.  They focussed, they concentrated, they were super-serious about getting this done.

When the timer went off, they counted up their circles.  We took a poll to see how many circles were drawn and the range was between 80 to 120.  For our purposes, we kept using 100.  Next, we figured out how many circles in an hour, a day, and then a year.  Finding out how many circles in a year was a bit of a doozy for them, but they persevered.  I was also happy to report that they knew how to read their place value very well.  Whew! 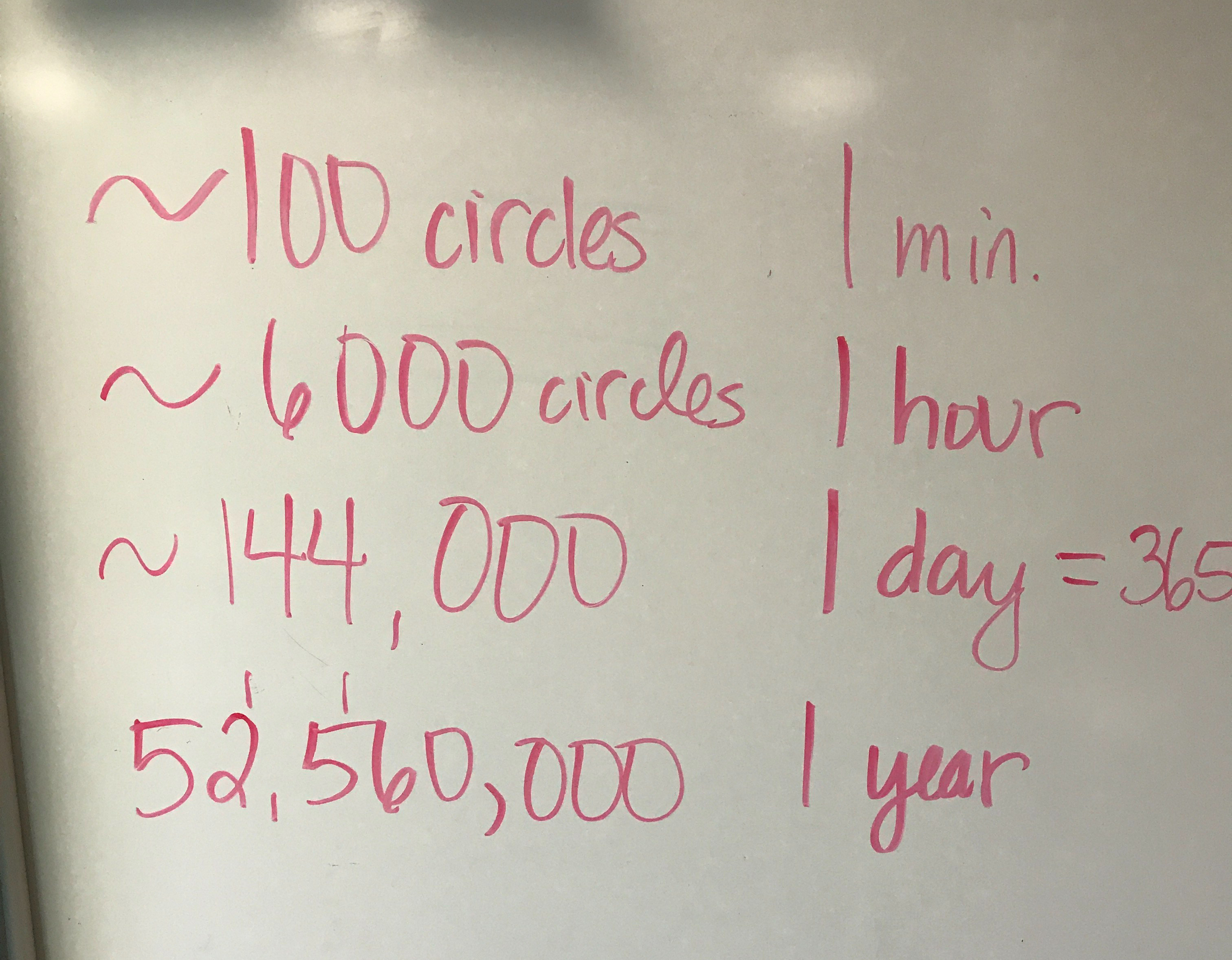 We even discussed what would 2 years looked like, and they told me it would only be one hundred  million circles.  “That’s not enough.”

I revealed the answer and they were floored.  I’m not going to reveal the answer in this post because I want to leave a little mystery to the question.  Go ahead…do the math yourselves.  (Answer is in the lesson PDF below).

We weren’t done yet.  For the last piece to this investigation,  I remembered this Twitter pic from Mark Chubb.   And I also saw a ripe opportunity to break out the clothesline.  I asked my students “Where would 1 million go?  Where would 1 billion go?”

After much debate and moving cards back and forth, this is what they agreed upon.  I was puzzled because they didn’t really know the relationship between billion and trillion.  I let them watch a video I found on Youtube and some referenced that when they were validating their answers.

However, I wanted to push them further.  I inquired why each of the cards was equally spaced.   Were there an equal amount of numbers between each number?  Some answered yes.  Some were completely puzzled.  Rather than beat the horse to death, I wrote a few new numbers on cards to see if they could show me the relationship.  I wrote 0, 10, 100, 1000.     The conversation got a little more exciting because my students were dealing with numbers they could relate to a bit more.  Unfortunately I forgot to take a picture of the final clothesline and specifically where they moved the cards.

Here’s the lesson if you’d like to try it out for yourself.