We have been on spring break this past week, however I had a hankering to write about other previous experiences in classrooms. Back in January, I had been asked to help with division  in a 4th grade classroom.  She wanted a fun activity to help the students.

I introduced the class to a game I called Division War.  With the help of Uno cards, the students had the opportunity to create their own division problems.   The student who had the largest quotient wins the round.  The concept is similar to what I had heard from Robert Kaplinsky in a session on Open Middle.  However, unlike just challenging students with an Open Middle concept, I like to rev up the engagement a notch with a little friendly competition.  The students don’t know that they are working on a DOK level 2 or 3.  They think they’re just playing cards.

To get the students started, Mrs. P and I played one round on the whiteboard.  I chose the numbers 8, 7, 7, and 2.   I asked the students where I should put my numbers.  They were pretty random with where to put them and this is what it looked like.  What I also liked about this part is that they had to identify which part was what.  We used our math vocabulary to make sure we were all talking about the same parts of the problem.

Then Mrs. P went with her green cards.  She chose 4 cards which were 4, 4, 5, 2.  The students helped her put the numbers in some sort of arrangement.  She happened to get a bigger quotient than I did.  Mrs. P won that round.

Now rather than just letting them start to play, I wanted to push their thinking a bit more.  I asked them if there was any way that I could win that round. Could I switch any numbers around so that my quotient beats Mrs. P’s quotient.   Some suggested to just rearrange the numbers in any order and hope for the best. However, one student finally came through.  “You put the 2 in the divisor and make the largest number possible in the dividend”  Bingo!  There’s the lightbulb going on!

The kiddos started playing.  It was great to see them having so much fun with a simple rendition of war but with Uno cards. I guess the novelty of having me help out and a competitive spirit really got the best of them.

Just as I was musing on the high level of engagement, Mrs. P came to chat with me.  “We have an issue. One of the groups has figured out how to get the highest quotient without doing any of the math.”    Well…now you have my attention.   We marched over to the group and I asked them to explain what they were doing.   One student told me that he didn’t need to solve the rest of the problem because he pulled a one and put it as the divisor.  He knew he had won. 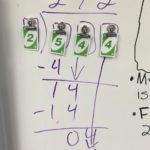 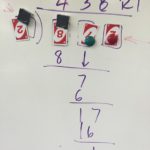 Then I heard this from a boy at the same table…”That’s cheating–he’s using one in the divisor.”  The boy sat there smugly like he had figured out my secret.  (I was laughing on the inside–loved it!)

As I walked away to check on other groups, I overheard Mrs. P trying to get the students to show their work.  She then threw them another challenge.  Mrs. P asked them to play another few rounds but with finding the smallest quotient.

Mrs. P ran over to me and told me about her discussion.  I looked at her wide-eyed and gave her a high-five.  That was actually a brilliant twist to my plan.

In our debrief, we encountered one hiccup.  How do we get the students to show all their work?  The group that figured out the “secret” would just choose 4 cards, look at them, and declare a winner without actually doing any of the calculations.  I consider that a good problem to have.