Fractions is one of the “F” words in math.  (The other is functions, but I’m not working with that grade level).   Whenever these two words are said, teachers usually groan with frustration (that other F word). Understood because both can be hard to understand for students.  Part of my job is to turn that frustration into FUN!

Third grade has been working on their fractions for the past 4 weeks. This week I went in to work with them.

First I started off my visit with a number talk using a picture that has been floating around Facebook.  This picture had the potential to initiate lots of discussion and it surely didn’t disappoint.

I let the students just stare at it awhile. Rather than taking observations and questions right away, I like my students to just have quiet time to internalize what they’re seeing. Next, they shared with their elbow partners their thoughts and questions. Then, I let them share their thoughts with me.  Watermelons provoke lots of discussion (who knew?).  Lastly, I asked them what possible question I could ask of them.  One of the teachers rose her hand and said, “how many watermelons are there?”  Being picky about words and vocabulary, I politely added to her question.  I asked the students “how many WHOLE watermelons are there?”

Here are some of the highlights of the three classes’ discussions….

Onto the class activity.  The third grade knows I come with something different, innovative, and unique.  I like to surprise them.  I didn’t invent this idea.  As a matter of fact, my inspiration was from a workshop I had attended given by Andrew Stadel.  He introduced me to Clothesline Math.   I wanted to use this idea of an interactive number line with fractions.   I envisioned a single clothesline with students approximating where to place certain fractions between 0 and 1.  However, one question lingered.  How can I maximize the engagement with the whole class in this activity?  Print out 30 fraction cards?  With my active imagination, I saw kids running for the number line, tripping over each other, and ending up in one gigantic entangled web of limbs, fraction cards, and rope.  Yeah…that wasn’t happening.

After a trial run in my office, one of my colleagues suggested that I put up two clothes lines.   LIGHT BULB!!!  That was it!  Split the class up.  13-15 kids working on a number line was a much better option than 30 kids per one number line.

So happily, I strung up two number lines in the classrooms (one in the front and one in the back).  I printed out about 20 fraction cards on colored cardstock.  I not only used unit fractions, but also chose equivalent fractions, and pictorial fractions.

The students were stoked and excited.  I promised them that they weren’t being timed (don’t like to pressure students with that element) but emphasized that they needed to work as a team.  Off they went. 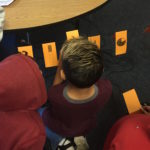 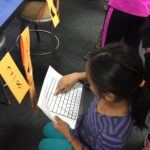 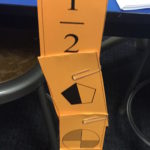 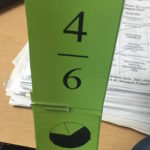 Here’s something I found intriguing.  One of the kids clipped together these two cards as equivalent fractions (see below).  He saw the picture as 1/5.  I intended for the answer to be 4/5, but could a student validate this as equivalent fractions?  I asked one team this question and none of the kids wanted to take ownership of it.  I think they were embarrassed to admit to it in fear that they would be wrong.

As a closing activity, we did a “would you rather” question.  Would they rather eat 2/3 box of cookies or 4/5 box of cookies?  They could write out their reasoning on the paper.  They were allowed to use whatever strategy they could to validate their reasoning.   I didn’t get to see how these turned out as my time ran out with each class, but my hope is that it was worthwhile.

After the excitement of the day, my mind is reeling with other concepts that could be used on the number line.  The third grade teachers also want to use the clothesline concept for other topics.  This especially excited me because it means I’m empowering my teachers to try new things in their classroom.