A few weeks ago, Mrs. Z (my kinder “rockstar”teacher from a previous post) was telling me how she wanted to work more with the hundreds chart.  She wanted her students to make connections from one to 100 and see patterns.   She uses her “placemats” from the textbook series, but she wanted more.   She showed me her hundreds chart which was the usual 0-100 from the top down.

A week later, I came to Mrs. Z with an idea I had read from Graham Fletcher.  His post called “Bottoms Up to Conceptually Understanding Numbers” was about the hundreds chart being inverted.  Instead of starting at the top with 0 or 1, the first line started with the numbers 91-100.  It completely makes sense conceptually.  If you keep adding more numbers together, what happens?  They get bigger or rise.  Since when, if you add numbers together, do you head further down a chart?

Mrs. Z stared at the idea intently as I sat quietly.   I can see the wheels in her head processing.  “Let’s do it!“ she exclaimed.   We ran over to her chart and swiftly switched the numbers around.

Yesterday, I eagerly arrived to her classroom to observe.  I could hardly wait to hear the  talk.   What would the kids’ reactions be?  Would they notice?

The students sat on the carpet and Mrs. Z asked “what did you notice about the 100’s chart?  Turn and talk with your partner for 30 seconds.”  The students were engrossed in conversation.  The little ones were totally on-point and taking turns sharing their view points.  Afterwards, she congratulated them because that was “the best conversation they have ever had.”  She then took answers from the students.

Here’s what was said…

I was definitely impressed with the students’ observations.

Mrs. Z then took it a step further.  She got out a bag of skittles and a jar and drops one in the jar.  She asked the students what would happen if she kept dropping more into the jar. “The jar fills up and there’s more Skittles,” one girl explained.   So, Mrs. Z filled up the jar with Skittles.  Now there were a bunch of Skittles that were “higher than just 1 Skittle.” 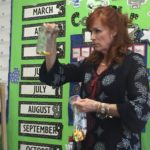 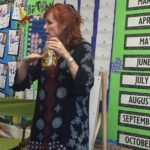 Wow…this was amazing and awesome conversation.  The kinders are rock stars.

And just when I thought we were done, IT GOT EVEN BETTER! 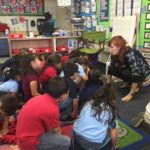 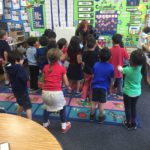 Oh…the learning didn’t stop there.  Mrs. Z was on fire.   She pulls out her water bottle and asks the kids to estimate where her water was.

They guessed around 50.  Quickly catching on, I grabbed my soda bottle (which was close to full) and asked the students where my soda was.  Most guessed 90.  I asked them what would happen if I drank some.  I immediately started gulping as much as I could in a few seconds (I don’t recommend this, however anything for the betterment of our students).  The students looked at me in shock, but guessed 70 or 80.

And just as we got done, one girl runs up to Mrs. Z and shows Mrs. Z her socks.  The wee little one explains that her socks are 100 and 0.

This little girl showed us her socks.  The one sock that rises past her knee represents 100. The other sock represents 0.

Holy  hundreds chart!  Mrs. Z and I were giddy with excitement during our debrief.  But we had more work to do.  She wanted to probe their thinking further.  We wanted to see if they would pick up on any patterns.

Day 2 – today Mrs. Z continued the conversation, however she tweaked the hundreds chart to look like this. 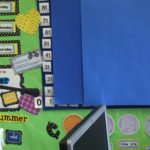 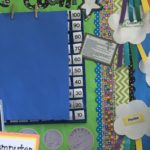 A number talk generated with the following observations….

After changing the papers to show a new row of numbers, the students said they could see 1’s.  One boy said, “I see numbers counting down and getting smaller.”

Next Mrs. Z handed the class to me.  I told the students that we were going to play “guess my number.”   The excitement was in the air!

Mrs. Z and I used an activity we found on Math Wire (100 board), except we used an inverted 100’s chart.   We figured we wanted to keep consistency with what we just showed them.  We also wanted to see how many of them truly knew their numbers up to 100.  The students were going to follow the directions of the arrows in order to find what number I was “thinking” of.

This math wizard used her magical powers to pull numbers out of the air.  The students waited with baited breath as I told them which direction to go. Because we used the inverted 100’s chart, we ran out of space (see 29 with 4 down arrows).  The students thought I was tricking them.  They were being fooled.  Well, this math wizard can’t fool any of them.  They are way too smart for me.

I haven’t yet debriefed with Mrs. Z about the past 2 days, however I can report that it was really worthwhile for her to take a chance.  As I have said before, those kids are inquisitive.  They do notice details.  And lastly, kindergartens are no fools.