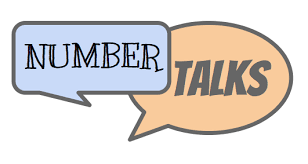 I love it when my teachers take an idea and run with it.  Not only did a teacher run with it, but added even more to a suggestion.   And that’s what I saw today.

One 4th grade teacher that I’ve been coaching (Mrs. P) had asked me to work with her on number talks.  She had wanted me to demonstrate a few on division and fractions before she tried one herself.  And that’s exactly what happened.  A few weeks back, I did one on division (one that I’d seen on the Teaching Channel) and I did another one on fractions.   I whole heartedly admit that they didn’t go as well as I had wanted, but we live and learn.

This week, we continued our work on number talks especially with fractions.  We went back to the basics.  We watched a video online (Dr. Jo Boaler) and went over the purpose of the talks.  Instead of over-complicating matters, we agreed to simplify the process.   Let’s use number talks to gauge where the students were in regards to their background knowledge of fractions.  Perfect.

We started off with a visual from Which One Doesn’t Belong.

Mrs. P and I debriefed really quickly at the end of that session.  She had the biggest smile on her face as did I.  It was a success.

But then the awesomeness kept going!

She asked the students to create a thinking map with another WODB on fractions.

She turned the whole idea of numbers talk with WODB into a full class activity.  Each student had to first pick a fraction (that they thought didn’t belong) and then write down their reasoning.  The students were interviewing each other.  There was tallying going on.  There was “writing in math” happening!

The check marks represent how many agreed with that statement.

The students even interviewed me.

Here’s why I think it worked –

Mrs. P and I have been on this math journey together.  She’s the type of teacher who wants to push her practice and just do better with “mathy” stuff (her words).   I appreciate that we can have real conversations without worry of judgement or pressure.   It’s exciting on my end to see her grow as a teacher.  She’s one of the reasons I love being a coach.