In my district, there are several 6th grade teams at three separate elementary schools. They are an anomaly in that they are invited to secondary professional developments & textbook trainings with other middle school teachers, but yet they are their own special group.  It’s not easy to have secondary expectations, all the while being at a site with kindergarteners passing by your window.  With all these new expectations, new standards, and a new curriculum guide, I saw the need for help.  Me –being a middle school teacher turned math coach–jumped right in.

Our latest venture at one site has been to start math talks.  I introduced them to Which One Doesn’t Belong, Estimation 180 and Would You Rather. They were excited by these routines because they are engaging for the students.  It’s not their usual math.  It’s different.  The teachers are now sparking conversations with the pictures and questions.  It’s been incredible for them.  I recently took their principal on a math walk into the three 6th grade classrooms so she could observe their new routines.  The principal was supremely happy. 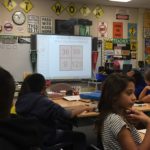 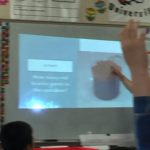 how many red vines?

One popular thought that came up during our work last year and this year was a simple question….how do you review previous units?  How do we keep information that we did at the beginning of the year fresh?  For instance, 6th grade began the year introducing rates and ratios.  Part of their “Would you rather” routine reviews rates.  For instance…would you rather buy a Starbucks Venti for $3.59 or a Starbucks Grande for $2.99.  Essentially we are asking which is a better buy. We are starting a math argument.

So how do you bring fractions, decimals, percents, and ratios to life?  How do you make that lively and different from what they see in their textbooks?   Well…let’s first look at this pic….

Donuts from a gift bag at Target

What do you see? What do you notice?  What math questions could we ask?

A simple routine comprised of many pictures of donuts, cupcakes, legos, or any variety of objects.  I’ve seen many math educators use pictures like this to start a visual routine/number talk.  Pictures are an amazing way to wake the students up and look at things differently.  I might bring this routine to my kindergarten teachers as a sorting activity.

So many donuts…..so many possibilities.