It’s that time of the year when our students are running to ___________(insert convenience store here—I prefer Target) to buy gobs of chocolates, candies, cards and all of the Valentine’s paraphernalia that is attributed to this holiday.    And in the spirit of such heartsy, lovey, dovey emotions, Mrs Z. and I put together another 3 act lesson. What better way to embody Valentine’s Day then to share with the ones you love.   In our case, it was sharing with your classmates.

Act One –the fight.

Along with every Three Act lesson, we encourage the students to inquire about what they are seeing with the questions, “What do you notice?” and “What do you wonder?”

Wonder – (what are you curious about?  What questions are running through your head?)

A bonus concept for the kinder teachers was that there were a few talking points to review.  Some students talked about what it means to share.  One class focussed on sharing so that the results are fair.   In one class, I had a

Act 2 consisted of us giving the students the information that there were 12 hearts in the box.  Using this candy-hearts template, we had the students figure out how many candy hearts Jared and his mom should get.  You can see the multiple ways that the students went about solving it. 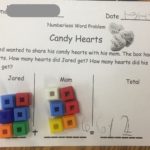 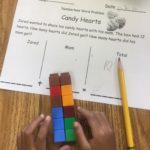 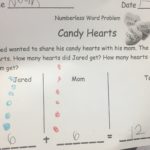 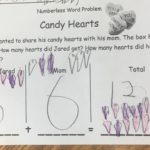 Mrs. Z called me over to listen in on one conversation.  Take a look below at what we observed.

Terrific piece of evidence.  This student observed that she knew that they were the same because they had the same number of cubes and had the same shape.

Act 3 is usually my favorite because it reveals the answer.  It’s really the best part of the lesson because you can hear the “YES!” or see the high fives spreading throughout the entire class.  Here’s how we revealed the answer.

Overall the lesson went better than planned.  There was another teacher that observed Mrs. Z doing this lesson and whispered, “this is dividing.”  I nodded and told her that was true, however I knew that Mrs. Z had begun working on some addition.  I also told her that you never know what our students are capable of until you give them that opportunity.

Keep spreading the LOVE of MATH!